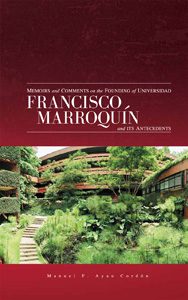 When Ayau started UFM, statist, populist and Marxist ideas were converging in a huge wave of followers in Latin America. Sometimes armed, sometimes peaceful. In a country that has had as much violence as Guatemala, what he did takes on a level of personal risk that is almost heroic.
Carlos Alberto Montaner, author and journalist Madrid

It is thanks to intellectual promoters like Ayau that ideas and institutional models advance in the world.
Martín Krause, economist Buenos Aires

UFM is not an isolated case of a small university in a remote spot of the world. Rather it is a true example to follow. It shows that it is possible literally to found an “idea factory” with a lasting and well defined classical liberal profile. I know of few institutions in the world that have inspired the creation of such an important repository of persons who not only understand but are committed to all aspects of liberty.
Roberto Salinas, philosopher and economist Mexico City