A companion to Ludwig von Mises 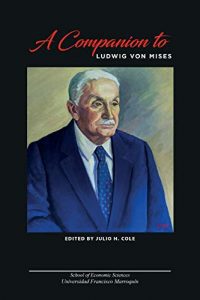 Ludwig von Mises was a notable contributor to twentieth century economics and a key figure in the Austrian School of Economics, both during and beyond his lifetime. His publications spanned seven decades, and he was an effective and inspiring advocate of the free-market economy.

He also made made many important contributions to theoretical economics. It is, therefore, highly appropriate that the UFM Companions series should include a volume devoted to this scholar.

The materials collected in this Companion are reflective of the wide range of interests that Mises was concerned with during his lifetime. The first two chapters offer general overviews of Mises’s life and work, while the other eleven chapters can be grouped into three broad categories: (1) detailed reviews of biographical materials, (2) essays devoted to epistemological issues, and (3) studies of particular aspects of the Misesian oeuvre.
— Julio H. Cole, from the Introduction