A Companion to Douglass North 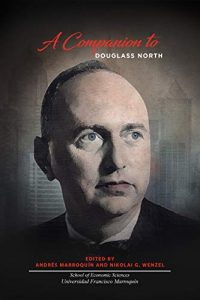 Douglass North changed the way we think about economic history. He pioneered the application of quantitative techniques to the understanding of historical fluctuations (cliometrics). He also transformed the way we think about social change. Early in his career, he embraced the neoclassical paradigm, only to reject it later because of its limitations. He proposed a series of innovative concepts that enriched our understanding of the causes of economic performance through time (the title and subject of his Nobel lecture). These ideas include the importance of property rights and institutions (formal and informal), economic organization and transaction costs, mental models, culture, and ideology. These ideas and others interact in complex ways and ultimately help explain why some societies are richer than others. North fixated on long-term changes and inspired a vast literature in new institutional economics, which is now a robust and popular area of study. For his work, he was awarded (along with Robert Fogel) the 1993 Sveriges Riksbank Prize in Economic Sciences in Memory of Alfred Nobel.

North was a lifelong learner. He was not averse to changing his mind about research methodology, and was willing to embrace new approaches as long as they allowed him to expand his horizons of comprehension. An example of this can be found in one of his last books. In Understanding the Process of Economic Change (2005), he highlighted the importance of cognitive processes as a key to understanding the formation of certain mental models that, ultimately, affect economic development in the long term. Indeed, even at the end of his very productive career, he was still opening new avenues to all of us who are interested in explaining the astonishing differences between rich and poor societies.

Andrés Marroquín and Nikolai G. Wenzel from the Introduction