A Companion to David Hume 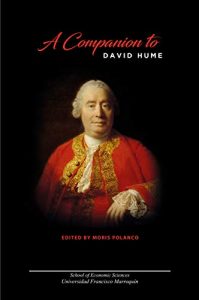 David Hume is one of those thinkers that marks a “before” and “after” in the history of philosophy. His intellectual legacy forms a good part of what we know today as modern philosophy. It could even be argued that he is the best representative of modern empiricism. Of course, nihil novum sub sole, and the problems that Hume addresses in his works are present, in a way, in the ideas of the ancient skeptics. But Hume is an original thinker and does not ignore the advances of science during his lifetime.

This volume seeks to dig deeper into different aspects of Humean production. We have collected here previously unpublished articles from specialists in the thinking of David Hume. Our goal is to serve scholars as they explore the ideas of one of the key figures of the Scottish Enlightenment and modern thought.

Reading and studying David Hume’s work is to get in touch with the genesis of modern ideas, particularly empiricism, naturalism, and skepticism. But reading the philosopher and historian of Edinburgh is not easy, because although many consider Hume to be an authority of the English language, two and a half centuries separate us from his texts. It is appropriate, therefore, to approach his ideas guided by scholars who have dedicated countless hours to their study. This is the purpose of the UFM Companions to Economics series.